Salo is perhaps the vilest, most evil minded film ever made, that can still be considered an artistic achievement. Sure there are many violent gorefests out there, brimming with intensity, but Salo is a cut above these, earning the title “the most controversial film of all time.” It is a beautifully shot film of the most vile content imaginable.

Salo is based upon The 120 Days of Sodom authored by Donatien Alphonse François, the Marquis de Sade, which he described as “the most impure tale that has ever been told since out world began.”  In it 4 Lords, a Duke, a Bishop, a Bank President, and a Judge- each representing a different pillar of society- kidnap 16 youths (8 boys and 8 girls) and take them to a fortress in the dead of winter from which they cannot escape. There with their guards, the Four Fuckers (men chosen for their enormous penises) and the Four Whores (old brothel keepers) the villain protagonists present themselves to the youths as their new Gods, their every whim to be considered law. They youths are told that they are objects to be used and discarded at the Lord’s will.

The Whores each take turns telling stories from their experiences as a prostitute and madam, to incite the Lords and form an inspiration for the sexual abuse and torture of their captives. The stories begin with simple vices, and quickly move on to complex, criminal, and murderous ones, emulated by the Lords- eventually ending in the slaughter of their victims. And in the end, all fourwalk away unscathed, because they represent the law and power in the world.

Strange as it may sound, de Sade novel’s was attempting to make a political point here, not a sadistic pornographic one. Simple and direct (and perhaps overstated as is de Sade’s style) he demonstrates that the forces of government and power, who are supposed to prevent things like this from happening to, are the ones perpetuating the crimes.

For a historical context, we must remember that de Sade wrote this during the French Revolution, where the greed of the nobility had created one of the widest wealth gaps ever seen in Europe. By today’s standards France was a third world country. And the people, driven by desperation and a lack of the basic necessities of life, revolted. Wide spread revolution tending only to occur when they had no other viable option. For many revolutionaries it was literally fight or starve. Thus the events of the book fits very well into revolutionary ideology of the time. 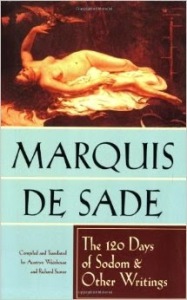 The 120 Days of Sodom is not actually a complete novel. While writing it de Sade was imprisoned in the Bastille, for crimes of sexual deviancy and for penning the novel Justine (another work detailing the rape of innocence by the ruling classes). He had completed only the first part and outlined the other three,when the Bastille was taken by revolutionary forces, freeing the Marquis and the other 4 inmates. Unfortunately for the Marquis this freedom meant a loss of a lot of his material, including his only copy of The 120 Days.

The book had been written on a long continuous roll of paper, made up of small pieces of paper glued together and written in nearly microscopic text and hidden away from guards. De Sade had believed it lost in the post-battle looting of the Bastille, and it was not seen again until nearly a half century after his death, tucked away in its hiding place. But still the novel did not see publication until the second decade of the 20th century.

Salo is the final film of Pier Paolo Passolini. He had finished his Trilogy of Life series (Deacameron, The Canterbury Tales, and Arabian Nights) and Salo was to be the first of his Trilogy of Death. Considering the unabashed cruelty in Salo one can only speculate what was going to happen in later films- consider Ilsa: She Wolf of the SS without the sex. Pasolini updated the setting, placing it during World War II in Salo, a town in northern Italy and made the four villain protagonists members of the fascist party. The town had a special place for Passolini as it was there that his brother was shot by the fascist government. But apart from these changes, he kept the flow and flavor of the book, picking and choosing which scenes of barbarity to display from the wide variety described by de Sade. Unflinchingly he kept the most grotesque scenes of rape, incest, blasphemy, sacrilege, torture, sodomy, and coprophagia.

Salo batters you, not with a continuous bombardment of images, but with a constant buildup of dread, a steady progression of evil, and the knowledge that it will get worse. There is no release from it. That dread is what cements everything in the mind. You cannot help but place yourself in the victim’s role and you find yourself asking, “What if that had been me?” Which is the cornerstone of the film, I never doubted that it could and might actually take place. A realistic horror film, which makes it all the worse.            This was Pasolini’s last film because he was murdered shortly after he finished editing. Always a controversial figure, he was last seen alive walking down a beach with a male prostitute. His body was found two days later. The autopsy determined that a car had driven over his head at least twice, he had multiple fractured bones, and his genitals had been crushed by an iron bar (some reports claim they were severed and placed in his mouth), then the body was doused in gasoline and set ablaze. The prostitute was arrested and confessed, but as he was much weaker build than Passolini it has been a generally held belief that he was innocent. Other rumors suggest a mafia execution, leftover members of the Italian fascist party, or someone else upset with Passolini’s communist affiliations.  The truth will probably never be discovered.

And as the film progresses the dread increases.  We see the four villain protagonists take in more and more power, act to spit every social convention of society, and eventually spiral deeper into their own madness. The scene where feces is served up as a delicacy is perhaps the most nauseating thing I have ever viewed, up there with Divine’s dog shit eating scene in Pink Flamingos.

The Criterion Collection version contains a lot of behind the scenes footage and interviews and I was surprised ro see that the cast had a lot of fun making this film, both torturers and the tortured. Most of the actors were young, never having been in a film before, so there were many laughs and practical jokes being played.  And since it has filmed so disjointedly, most of the actors did not realize just how grim the final product would be.

Viewer beware. Salo is a solid film, but earns it’s title of “the most controversial film of all time.” Criterion version is here.

Trailer is below. Enjoy and Caveat Emptor