This incident happened at a minor independent comics convention up in Toronto. My pal Don, who owned a comics store, drove a bunch of us over the border to Canada. Don, who had comic iconography tattooed up and down both arms some of it leaking onto his chest, was a fanatic on the subject. He was rabid about getting signatures and original art.

Myself, I enjoyed the art and the stories and that’s all. I could never get into collecting autographs of writers or pencilers. It’s foolish to pay an extra ten (or more!) dollars for a few more words.  Additionally the difference between a first and second printing can alter the price of a book, in the eyes of “real collectors”, by ten to twenty dollars. In most cases the first and second printings have the same story and art. So what makes one more valuable than the other? Human stupidity, that’s what. And I learned long ago that if a comic is labeled a  “collector’s item”, then it’s a guarantee that in a year it won’t be worth a dime. Once the publishers slap that label on the front cover, a frothing horde of fan boys run about bagging-and-boarding the comic and squirreling it away in a basement for all time. 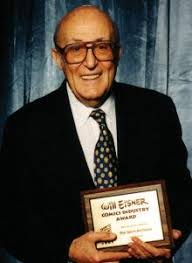 To listen to these collectors talk, you’d think they were investing in the stock market. “This’ll be worth like…a lot of money someday.” Unfortunately no one’s buying for top dollar. Think, all you collectors, have you ever heard of anyone out there actually cashing in on their stash?  No. On the rare occasion when it does happen, it’s their family who does it, after the person’s dead.

My favorite part of a convention has always been the independent dealers. Little guys who’ve published their own work as a labor of love and are just trying to make a buck or two. They might not be the greatest written or drawn books in the world, but they have heart. I almost always find something worthwhile, which I might not otherwise ever see again.

What had attracted Don to the event was the appearance of Will Eisner, creator of The Spirit, (a big deal), and Dave Sims, creator of Cerebus (a lesser deal). I could’ve cared less. I wanted the product, not the creator, so I paid little attention to what was happening outside of my narrow view of the independents.

I was looking through some Korean drawn comics, when Don came running up to me.

“I need your help with something, dude.”

Apparently there was a sign up in front of Eisner’s empty table stating that he would only sign three items per person. It was a smart move or else people would be backing up U-hauls of stuff for him to scribble on- Don being one of them. He had arraigned (for a fee I assume) to bring some stuff up to the convention for several of his customers. Now he wanted me to stand in line to get it signed.

“I hate that stuff.”

“Hey fuck you dude! I drove you up here!”

How could I argue with that?

So into line I went. He gave me  two slim books and a hardcover collection of The Spirit Sunday comics from the 1940’s volume 19, published by Dark Horse, costing about $50. Way overpriced for my limited income. I was third in line, but Eisner was late coming out and I could feel valuable minutes of scrounging slipping away. Don was a few feet behind me, in the other line, nudging with this toe a box of phone books for Dave Sims to scribble on. He caught my gaze and gave me two enthusiastic thumbs up. The cheeriness was not infectious.

Eventually Eisner emerged from behind a curtain and sat down. He was an old Jewish man, neatly dressed. After I saw him, I must admit, my enthusiasm increased. How could it not? Here was a living legend before me, a man who had helped to pioneer the entire industry. Hell the highest award in comics is named after him. What was he like? An angel or a monster? I just hoped he wasn’t a prick. If he was, I would never be able to enjoy his work again.

I stepped up to the old man, who grinned benevolent at me and reached for the books.

And he wrote To Rex, thanks for the support, Will Eisner, in the first book. This apparently is a big no-no in collector’s circles. Apart from the fact that the people who owned the books probably weren’t named Rex, having someone else’s name in the inscription, rather than the naked autograph, lowered the value of the books.  It was now worth only a little more, rather than kinda more, of the standard resale value. Don bitched at me about this later, but what was I supposed to do? Tell Eisner not to personalize it because that would screw up my plans to make quick buck off of him later?What’s your name? Ebay!

Then he reached Volume 19 of the collected Spirit and his eyebrows raised in interest. He picked up the hardback and examined it carefully.

“I haven’t seen one of these yet,” He looked at me and winked, “I bet you’ve got them all don’t you.”

He looked at the price. “Fifty dollars? You know when they were putting these together and they told me how much they were charging, I couldn’t believe it. I said to them, ‘What kind of idiot would pay that much for this?’”

Then he stopped and looked a little sheepish, remembering that I had just claimed to own all of them, which if I had would’ve totaled close to $1000. I reflected that if I had actually bought this stuff I would probably be pretty insulted right then. Should I fake outrage? No, it was just one of those things. It really was a pleasure to meet him. It was an even greater pleasure to see that he wasn’t a complete egotistical prick, like several other of my writing “heroes” had turned out to be.

I shook his hand and left.