Ahhh, the High School graduation ceremony. A stifled time of pomp and circumstance, where proud parents sit bored stiff in a stifling hall for an hour and a half, waiting for that two seconds when their acne-ridden whelp stumbles across a flimsy stage and is handed a scrap of paper.

Does anyone enjoy these events? Having worn many hats in graduations- parent, student, and presenter- they are always a tedious affair. Lots of people you don’t care about standing up, giving speeches that go on for waaaaaay too long, that turn minutes into hours and hours into millennia. I have never met a soul that said to me,

“Boy, I enjoyed that whole ceremony.”

So why do we have them? Who the hell knows? No one is brave enough to hit the brakes and scream that ceremony has no clothes.

Recently, for reasons that are unimportant, I was corralled into attending a graduation ceremony for an Adult Learning Facility provided by the state, for those who wished to finish their diploma or simply obtain a General Education Degree. And I must say, I found the event much different from the standard yawn-fest.

The structure of the ceremony itself was the same. Talk, talk, talk, look at watch, hand out paper, talk, talk, yawn, talk, begin to nod of, wake in a start, finally done! But the general character of the attendees was something else entirely.

What caught me off guard was how over-dressed I was. In every other similar event, it was de rigueur to dress in a suit and tie, or at least as button down dress shirt and slacks. But apart from the superintendent and others staffers, I was in the extreme minority.

As you can see from the pictures, this was a dress-down affair to most of the attendees. Flip flops, cargo shorts, “I’m with stupid” t-shirts, extendi-flex waistband sweatpants, ball caps, and hole-ridden jeans were in full bloom. Even many of those who were receiving degrees declined the standard cap and gown, walking up to receive their degrees in jeans and rumpled shirts. 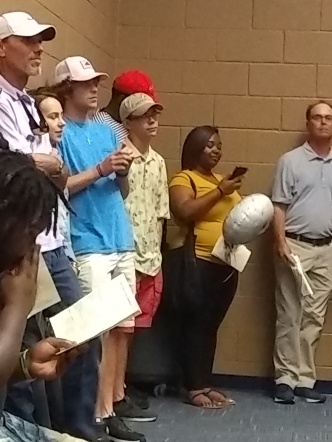 Along with the lack of dress, the crowd spent a great deal of time eating and drinking, mostly gotten from the school’s vending machines. The only product available in them were small bags of Doritos- though the flavor did vary if that makes any difference. The soda machine was, of course, your standard variety of sugar water with various chemicals dumped in. Even though the ceremony was only about forty-five minutes, runners from the various families were sent back and forth to retrieve more and more goodies. One family I saw pulling all sorts of snack cakes and the like from a hamper they’d brought along. Forward thinking, I guess?

In addition to this, there were some odd choices of speakers among the anointed few to take the stage. Specifically, two people representing the Welfare office and Unemployment offices for the state. Both gave three minutes speeches in which they both had a single point. Don’t rest on the “laurels” of obtaining an equivalency degree, go out there and actually get a fucking job. Which makes sense, the highest concentration of people to use both of those offices were those lacking education. But the amount of times they repeated this idea that the student needed to keep going, made me think it wasn’t advice that was taken very often.

What really caught me off guard was the amount of noise generated. I’ve been to much larger graduations before, but this one, with the smallest number of graduates that I’ve come across, was the noisiest. It wasn’t just when their unkempt loved one shuffled briefly into view, but during the entire proceedings, they talked amongst themselves, sharing jokes and gossip, and openly not paying attention to the man on deck. 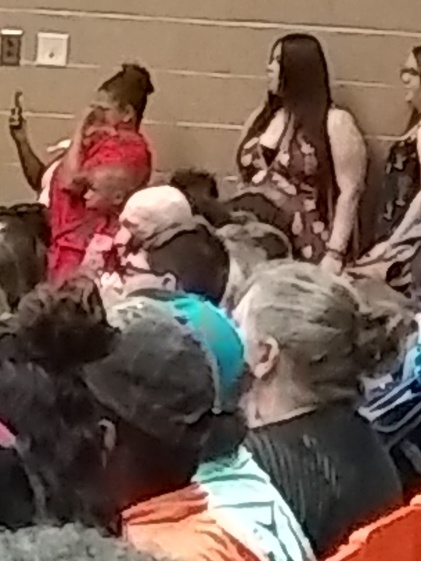 Then came a stern request from the head of adult education for people not to make a lot of noise when their family member walked across the stage, as it may cause others to miss out on their own member being announced. The request was immediately ignored.

“That’s my sister!” or “That’s my cousin!” was yelled after every name was read off. Uproars popped up over and over in different sections of the room as felonious people hopped excitedly to accept the lowest of academic honors. People leapt, hooted and hollered, each family trying to outdo the other, like some kind of deranged entrance on Family Feud.

“My boy’s done got himself a G.E.D,” screamed a tear-filled glandular disorder, as if the boy had brought home a Heisman.

Outside of a football stadium, I have never heard anything like it. It was photo negative of the “sit politely and endure the tedium” policy I had been raised with. Still even that paled compared to the final blow.

After all the names had been read off and the last tassel pulled to the right, the ceremony was supposed to end with a processional, in reverse of how they entered, of students, faculty, and staff. Well, that didn’t quite happen. 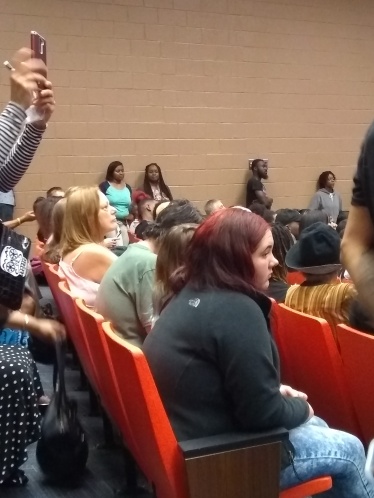 After having to sit through forty-five minutes of commencement rites, allowing the graduates another two minutes of dignity pushed the attendees to their breaking point.

People began cutting in line, rushing ahead to get out of the building. Then two brutes actually stopped the processional to let the rest of their family out, grandmother, mothers, little kids. After that, the gloves were off and the seats emptied into the aisles, creating a sweating mass of tangled human taffy. Everyone strained to be the first one to reach the door and ironically ended up delaying their departure for much longer then had they just sat quietly.

Eventually they filtered out, leaving an incredible mess of Doritos bags, empty soda cans, crumbs, and various other unidentifiable stains all over the auditorium. Along with the intangible stains of destroyed human dignity.