Normally I’m a beer and beer nuts man, but due to some protracted whining from my girlfriend and the fact that she splurged for the tickets, I was obligated to attend the annual Rose Wine Festival at the City Roots farm in downtown Columbia. Now as time goes on at these events, my memory naturally becomes more and more hazy until I wake up half dressed in my bed the next afternoon and burp out, “How the hell did I get home?”

Of course, currently I have an Uber account and a girlfriend who could drink Hunter S. Thompson under the table, so the inevitable blackouts are less of a worry to me.

The first thing I noticed was that this was a very different clientele than attends the beer fest. It seemed as if every rich college girl was there, schmoozing it up with her friends. Each wearing similar clothes, similar hair, sunglasses. They even had similar voices. That upwards “yah” inflection which is de rigueur to master before entry into a sorority. You could only tell them apart by their height.

“You look so pretty.”

They looked the same.

On this particular weekend, there had been dire predictions of an apocalyptic downpour which threatened to toss back to the city back to the time of Noah. In fact, they had canceled my beloved Taco Festival the previous day due to these forecasts. The fact that the state has had massive flooding for the previous two years gave weight to the weather reports. Therefore, to combat the elements, all of the wine tasting vendors were placed into a very long stall and everyone else jammed in with them.

The deluge never happened, but it felt as if it could have at any moment. The air was muggy and pregnant with moisture. That heavy air which causes everyone to sweat more and with everyone jammed into the same stall the temperature quickly rose. And with it the BO. 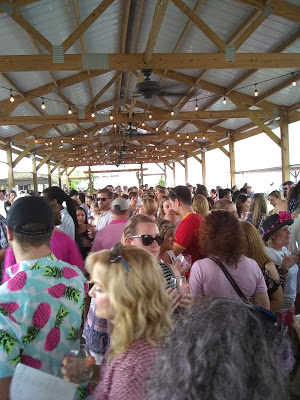 There were a few connoisseurs there. People going through the rigamarole of smelling the wine’s nose, peering at the chromatic redness of the juice, then sampling it, only to spit it out in a nearby bucket. But they were edged out quick as the rising tide of sweating bodies must have overpowered even the most pungent wine. And as for spitting it out, well, heh heh heh, that didn’t last long and I certainly didn’t indulge in the repulsive habit of wasting alcohol. I slurped it down! Hoping the effects would soon inure me to the crush of bodies and their bad smells.

As I was adjusting myself to these new surroundings, I noticed a new fact about myself. Honestly, I can’t tell the difference between one type of red wine or another. If it was beer I’d be all over it, hoppy, smoky, pilsner, Belgian, dubble, tripple, quad, pale, milk, wheat… and all the subtle variations within those classifications. Sweet and dry was all I could make out from these liquids.

Now all of this drinking, even if it comes in dribs and drabs, builds up over time into a swell of alcoholic bliss and eventual unconsciousness. So the need to stanch the flow of alcohol in the blood, or slow it down, was great. Luckily, this was included in the price of the ticket.

At a massive open roast oven, huge platters of steaming paiea was plopped down for the now completely blitzed crowd. At the sight of the food, the onlookers let out a collective moan of hunger. As one, they ripped into the Spanish dish. It was a display of pure horror. Women shrieked and clawed their way ahead, ruining their nails almost beyond repair. Men battered back their children and wives to grab fist-fulls of the food, only to be garroted back themselves by the sneakier attendees who had the foresight to bring waxed coated twine and yarn to the event.

One lady, dressed in a day-glo orange, lay dazed and drunk on the manure ridden floor, propped up against a log. Her husband, kneeling down, was attempting to feed her a forkful of paiea, when a trio of college girls descended on them. Two of the girls screamed and attacked the man, battering him in the testicles and attempting to claw out his eyes. The third began to repeatedly kick the wife in her face. The food was scattered across the floor.

I myself attempted to get a nosh, my woman was squatting in the port-a-john by this time, only to be spritzed in the face with pepper spray by some old pinch-faced alcoholic female, upset that her womb was now no better than a rock for reproduction.

Now, it was my turn to scream. I ran blindly away, knocking over people young and old. If you’ve never been pepper sprayed, I cannot do justice to the amount of pain and disorientation that comes over one. It was like a box of miniature hornets had been let loose in my eyes and they were having a field day stinging. My nose and throat became clogged with mucus. It was only after I stormed a vendor’s area and emptied half a bottle of J. Brut Rose from the Russian River Valley into my eyes, that I felt relief.

My significant other, finished with her deuce, grabbed me.

“I called an Uber. Let’s get the hell out of here before we’re all killed!”

I roared an assent, then filled my complimentary glass to the brim with a left behind bottle of pinot noir, and we ran for our lives from the event.