As an obsessive reader, I have picked up all sorts of oddities over the years. If you spot me at comic cons or book sales, I am the guy at the 50 cent bins digging furiously for bits and pieces of obscure treasure (another man’s trash). After a con, my friends would rush in bragging of their finds saying,

“Hey look, I got this signed Matt Wagner print for only $50.”

And I’d throw up and armload of merchandise and retort, “Hey look, for that same 50, I got a hundred comics.”

This would cause them to back away and be reduced to tears.

And I would rub the salt in the wound by saying,

Inevitably, as they are so inexpensive, I end up with a lot of odd selections. I’m not saying that everything I got was great, but they were different and I’ve always gravitated towards different. So for those who are interested, here are a few pieces that I’ve picked up over the years.

Mr. T and the T Force

As you can see from the photo (sorry about the glare), my copy is still sealed in its bag with the collectable trading card intact – meaning that it’s worth like… a lot of money. And if you look closely, yes, it was drawn by comic legend Neal Adams of Green Lantern/Green Arrow, early X-Men, Batman, and Superman vs. Muhammad Ali fame.

This was produced by NOW comics which, like Malibu and Eternity, sustained itself for a time by acquiring licenses and producing comics based on previously profitable venues: Titles like The Real Ghostbusters, Speed Racer, The Green Hornet, & Married… with Children. But, like many smaller publishers, they went broke in the mid 1990s and for the same reasons. The readership base had graduated and needed to spend money on things like rent, over-saturation of the market, a decline in comic quality overall, and too many gimmicks in comics. For instance, the first three issues all had variant covers, die cut covers, trading cards sealed in, etc. This is aimed at the obsessive hoarder, not someone who wants to read a good story.

This was produced in 1993, which was an odd time to produce a new product around Mr. T. Sure, he was popular in the 80s. He was on a hit show, The A-Team, had a cartoon, even had his own breakfast cereal. However, all that had waned significantly by the early 90s and he had essentially become a punchline. Still, the comic lasted for awhile. The exact number is up in the air. Some claim there were 14 issues, but only 10 are listed in My Comic Shop, while 7 is the max number in Mile High Comics. Even Wikipedia is uncertain as to the number.

If you’re actually interested in reading them, the entire run (however many that is) is out there and can be picked up cheaply. The art is decent, but the story reads like a poor-man’s Luke Cage. “I’ma clobber this fool!” or “I pity the fool that don’ care for his community.” Caveat Emptor. 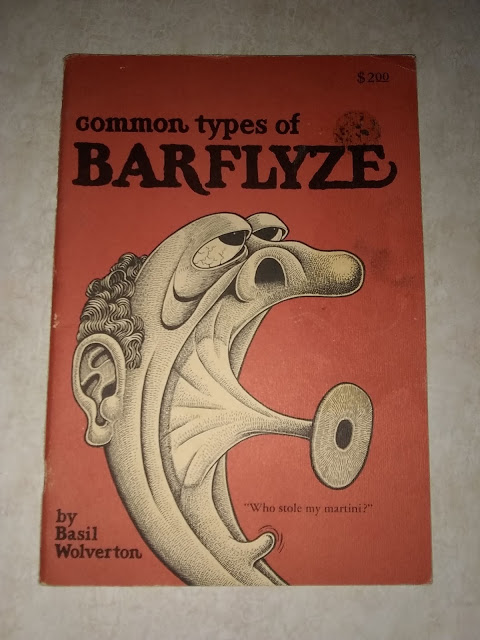 This is perhaps one of the earliest purchases in my collection. Apparently this is an underground classic, but the comic shop near my house where I grew up had a whole bunch of them in a box. So naturally, I grabbed one back in the day.

Basil Wolverton, for those who don’t know, was an American artist who got into comics when they first popped up. In fact he drew one of Marvel’s (then called Timely) first superhero stories- Rock Man. But he really popped into prominence by winning a Li’l Abner contest, co-sponsored by Life magazine, to finally depict Leena the Hyena- a long standing character from the strip who was said to be revolting in appearance, but had yet to be seen. Out of 500,000 entries, Wolverton won. He then went on to draw for Mad and various other minor magazines. 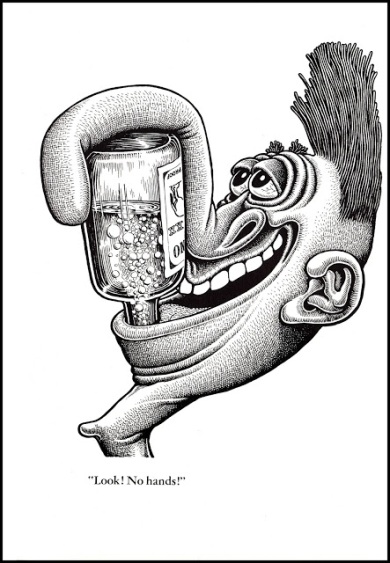 This book was his last publication while alive. In fact, it might’ve been published posthumously- accounts vary on it. It is a simply, but humorous collection of single panel illustrations, making fun of drinking culture. As you can see from the various examples, Wolverton has a unique, grotesque style, which was unfortunately repressed often in his career. No one has come close in mimicking his style or his sense of humor.

The World is His Parish: The Story of Pope Pius XII

Published in either 1953 or 1954, by the Catechetical Guild Educational Society (An organization that still seems to be around, but not publishing in the United States), this book presents the life story of Pope Pius XII, the 260th Pope of the Catholic Church. Birth name was Eugenio Maria Giuseppe Giovanni Pacelli (say that ten times fast) and was an outspoken critic of race-based crime and communism. In fact, according to Wikipedia, he “issued the Decree against Communism, declaring that Catholics who profess Communist doctrine are to be excommunicated as apostates from the Christian faith. In turn, the Church experienced severe persecution and mass deportations of Catholic clergy in the Eastern Bloc”.

He was the pope in residence during WWII and often was criticized for seeming to do nothing during the fascist takeover by Mussolini and Nazi atrocities (the Church was officially neutral), but in fact he funneled quite a bit of money to the German resistance- which is why so many priests ended up in various concentration camps.

Enough with the seriousness. This was published during the great comic book proliferation of America, where many parent groups were “concerned” over this vile ten cent plague and the evil Wertham wrote his book Seduction of the Innocent which eventually ended up setting the medium back decades. In response to “violent” crime books a number of spiritually uplifting publishers cropped up to educated the younger generation. This is one such example.

The art almost looks like early Jack Kirby, but isn’t. It’s a generic style of the time and the action is bizarre. Most of his life revolved around boring liturgical   doctrines, many of which were put aside by Vatican II. Therefore, action scenes were invented to give the appearance of something happening in order to draw in the young people. However, the hilarity of some drunken loser, ready to fight, being stopped and brought to tears by a cardinal is ridiculous.