Continuing with my series about odd and/or rare comics that I have discovered, this week I present new odd and/or rare comics from the yearly cull of my collection. The problem with having a reading addiction is that you inevitably collect a lot of books and, as my house is not the Tardis, space eventually runs out. Thus, I need to go through twice a year and remove tomes that I know I will never have the desire to glance through again. As I get older, this chore becomes easier and easier.

As I previously stated, there are a number of comics which you might be hard pressed to find… at least at a reasonable rate. Understand that these comics are rare, but not valuable. The reason they are rare is because there is no demand for them so they’ve never been reproduced. Lack of interest caused them to be tossed into a dollar bin and eventually were picked up by my greedy fingers. 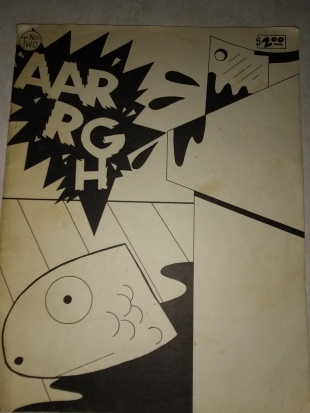 Written and drawn by Ken Struck, apparently there is a number one to this comic and a number three as well, but I’ve never seen a physical copy. This is listed as a mini-comic even though it’s actually larger than your average comic and printed on very heavy stock paper. But it was the strangeness of the piece which attracted me to it.

This comic was part of the next generation (newave) of underground cartoonists in the 1980s. He had some of his Tootles cartoons (pictured below) published in Weirdo magazine, which was edited by Peter Bagge at the time. After that came these few mini-comics and then nothing.

The art is not the best but the stories are hysterical. The man knew how to add the flavor of humor to any situation, whether domestic or bizarre. I remember passing this one around to my friends in High School and us all having a good laugh. And I’m genuinely sorry I can’t find any more material published from this author.

Created by Jane J. Oliver, the subtitle on the first few issues of this indie comic was “The Stoned Vampire”. This might be the very definition of an underground comic. It’s in black and white and consists of series of stories around the titular Jerry from all across time- from the Renaissance to the Modern Era.

It is incredibly difficult to find information on this comic. Each issue had an average of five to seven stories. The first few issues were completely drawn by Oliver. However, as time went on, more and more illustrators drew individual stories to the comic. Starting in 1978, only ten issues were produced, averaging about one a year. The original author died in 1992 and her wish was for the comic to continue, but no one seems to have picked up the torch.

While the art is rough in places and certainly is not of Marvel level professionalism, it has heart. The title is a labor of love and the joy of it’s creation is obvious in every line on every page.

I own about five issues of this series and, considering that each issue averaged about 2,500 copies, I’m probably lucky to have any. Whenever I looked for more, either it comes up nil, are issues I already own, or are way overpriced. I mean, I would like to buy it, but I’m not paying $40 for one underground comic, no matter how rare. It’s a pity someone hasn’t collected them all and put it out as a print on demand. Hell, they might even be in the public domain by now. I would but I only have half the story.

I literally grabbed this one at random at the Soda City Comic Con. After my usual feeding frenzy, I was stripped of nearly all cash and weighed down by bags and bags of comics. I was about to leave, but that one final dollar was burning in my pocket. On the way out, the last (or first if you’re coming in) comic vendor had a sale box on beat-up Gold Key comics and I snagged one. Why not?

Most of Gold Key comics were crappy spin-off series, leeching off of the popularity from established names in television, cartoon, and film series. They produced comics like Daffy Duck, Happy Days, Tennessee Tuxedo, and Voyage to the Bottom of the Sea. A little aside, in 1967 they also reprinted in English a little known Japanese manga called Kimba the White Lion. Many many people noticed striking similarities between the adventures of that character and Disney’s The Lion King. You can read the whole flap here if you want.

Back to Dagar the Invincible. Don’t feel ashamed if you’ve never heard of him. His run only lasted about 18 issues, but with a few minor stories appearing in several other books. He was part of Gold Key’s original series. Some went onto minor fame others didn’t. Ever hear of Magnus Robot Fighter, Turok Son of Stone, Doctor Solar, The Occult Files of Dr. Spektor? Probably not, well they’re also titles of Gold Key.

This series was somewhat unique in the comic book world of the early 70s in that it was a “sword and sorcery” title before Marvel licensed out Conan and started a boom of the genre. This is a fun read. The character really doesn’t rise above the big, brawny thug who cleaves through all his adversaries (mostly monsters, supernatural foes, and the occasional wizard). He travels around finding a new city or town each story and has no friends. It’s very decent if you’re just looking for some old school, uncomplicated, barbarian rage fun.