This is the third and last part of the Rodiad, a vaguely pornographic poem on about being whipped, penned sometime in the 19th Century. For some reason, this seems to be a stand out fixation of sexual deviancy in Victorian England. This was not just limited to men. Many women’s magazines and off-color books had spicy tales of women in bondage, whipped by men and women alike. The lesbian angle in Victorian literature was almost a universally presented in a master-slave context.

There, too, poor parents clear a little sum,

By letting out a child’s attractive bum

To any wealthy whipper who may come —

“Here, sir’s my Johnny — he’s the lad to squeak

He’s not had his allowance for a week.”

I ’ve brought him here, sir, at the squire’s request ;

Who says he’s of a band of thieves the chief,

And must be flogged till his behind’s raw beef —

So work him well, and keep him in your power,

I ’m sure he ’s cheap at eighteenpence an hour ; ”

Their love in various stages intervenes,

And adds its raptures to these lively scenes ;

The Rod is cupid’s surest instrument.

Among the best posteriors of the nation ;

Are twigged without reserve by apple twigs.

But in the middle ranks, I ’m grieved to say, 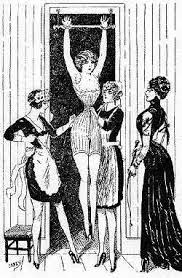 Tradesmen I know with many a blooming boy

Who scarce the privilege of the birch employ,

And for whole months, through innocence or pride,

Saddlers and shoemakers have no excuse,

With tingling straps at hand for homely use,

If in their household reigns the least abuse,

In ropeyards arses pleasantly are flayed ;

But the whipmakeds is the lovely trade —

Each thong he fabricates he ‘s bound to see

That it performs its business properly ;

So its impression on the children tries,

Watching the weals how thick and red they rise

Till their exposed posteriors tell the tale,

Of every whip he keeps exposed for sale.

The Clergy, careless of the Word of God,

Too often “spoil the child and spare the rod;”

Unlike that old goat Solomon, who had

With scores of splendid wives before his eyes,

And all their offsprings’ bottoms to chastise ;

’Tis curious how he found the time to write,

Whipping and wenching all the day and night.

Time was — before the philanthropic trash —

When jails resounded with the hearty lash ;

When any morning some known rogue you ’d meet

At the cart’s-tail sent yelling through the street ;

While the delighted crowd with jovial cries,

Urged on the hangman’s boisterous exercise.

To see the strumpets whipped at the Old Bailey,

And made high bets which blubbering lass would bare

The finest bubbies to the public air;

But now to turn a crank or tread a wheel

Is all the pain our criminals must feel ;

And for all punishment each pilfering elf

Is shut up in a cell to have — himself;

The ruffian rascals lashed to the triangles —

And only in the camp or bivouac

Is the black deed paid off by purple back.

Some merchant captain now and then at sea

Asserts the rope’s-end’s due authority,

And with tarred cat-o’-nine-tails strips the skin,

Sheer off the flesh — a famous discipline ;

While for his private and domestic fun,

He ties each youngster to his cabin gun,

Than even on the top-mast’s altitude.

Now for one instance, ere I close my song,

How this good habit helps a chap along :

A clerk, not twenty-eight, with charming wife,

And seven stout children to support in life,

Three boys besides whom, illegitimate,

A shipwrecked brother left to any fate —

Thus he sustains with unremitting toil,

And makes the pot in honest plenty boil; 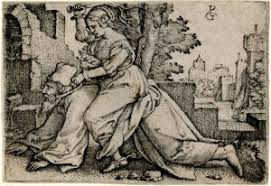 Tells all his friends he is the happiest dog,

With such a wife to kiss — such lads to flog —

Saying he’d rather whip them at his ease,

Before his frugal meal of bread and cheese,

Than have the grandest supper in the land,

And be debarred from taking rod in hand.

To hand her husband as he runs upstairs,

And finds the children to their night clothes stripped,

All ready to be sent to bed or whipped ;

Then he looks o’er the offences of the day —

The unsaid lesson or the truant play ;

The sulky looks, the fight, the pert reply —

If he’s in luck — some fault of deeper die;

And as the informant each misdeed asserts,

He daintily pins up the culprits’ shirts,

And does the needful as their size may be —

Across the bed or clasped upon his knee —

So be it with each English Family.

Maintain it bravely each in his own sphere ;

Parents, schoolmasters, guardians do your best

Never to let the Rod in torpor rest —

Extend the practice, propagate the zest;

Flog at all times, in every novel mode,

Instruct your teachers in the Bushby Code ;

Shew how when gratified this appetite

Conduces to the comforts of the night;

And the wife’s favours you will soon enlist,

Who finds the more he flogs, the more she’s kissed.

Let every nurse have licence free and large,

To scarify her juveniles in charge;

And make each nursery, in its form and rule,

Let children take it as the natural thing,

While canes and cats, and various whips impart

Their own experiences of all kinds of smart ;

Till they find out that their behinds are made

To be kept always scarred and sometimes flayed —

And that all education means — educe

This way or that — the bottom’s purple juice.

From you I have no fancy to repair

To where unbottomed. cherubs haunt the air ;

Rather, methinks, I could with better grace

Present myself at some inferior place —

There offer, without salary, to pursue,

The business that on earth I best could do —

Propose to scourge the diabolic flesh,

For ever tortured and for ever fresh ;

And whip the wicked out of space and time

Xor if the “Eternal Schoolmaster” is stern,

And dooms me to correction in my turn,

Shall I complain? When better hope is past,

Flog and be flogged— is no bad fate at last. 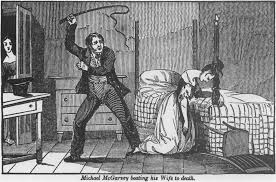