With the preliminaries all covered in the previous blog, the wedding and the murder ship – The Rhapsody of the Seas, let’s move onto all of the exotic sights my child bride and I saw. But let’s remember, every night was a party aboard with unlimited drinks, so we tended to be somewhat groggy during the day, often not stirring until 10 am before embarking on our adventure.

The actual original name of this fishing village is Mahahual, but once cruise ships staring going there it was redubbed to make the place sound more exotic. This was my first taste of Mexico, apart from certain disastrous parts of my childhood, so I was a little curious. Everyone flips back and forth on Mexico. Either the place is run by drug cartels and corrupt cops and who will kidnap you and rape your children, or it was a wonderful place where everyone was happy, happy, happy. I didn’t see either of these.

As we got off the ship, we had to show, not our passport, but our cruise card to the waiting officials. While also being our room key, this little beauty acted as our personal magic wand all over the ship, every time we wanted something we had to display the card to charge us later on or determine if we were part of a pre-paid package. Here it was more important than our US government documentation. It allowed entrance and, more importantly, exit from the country. Drug dogs sniffed our bags going into the port, but not going back on. 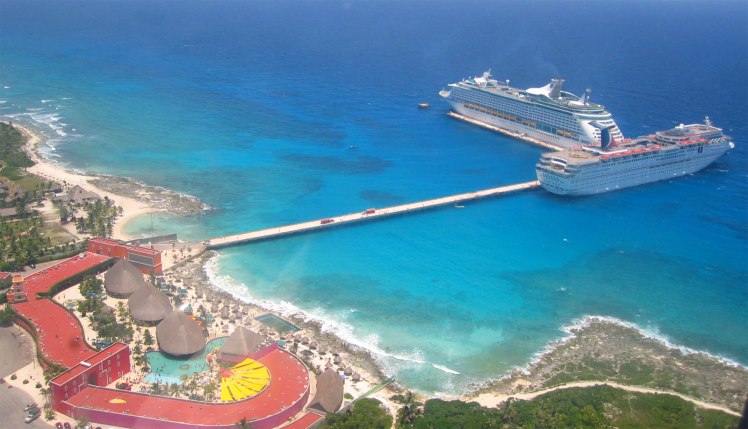 We walked down a long pier and into one of the greatest man made tourist traps ever devised. It was a three block long, twisty-turny collection of open air bistros, souvenir shops, and bars. As a visiting gringo, everything you could want was in this maze: tchotchkes, knick-knacks, brick-a-brack, t-shirts, mugs, souvenir spoons, magnets imprinted with the Mexican flag, Cuban cigars, leather wallets, sombreros, maracas, and so on. This was topped off by a large artificial pool right in the center of the complex, where one could soak in the sun’s rays or, for a modest fee, play around with inflatable animals. The one thing you couldn’t do was swim in the ocean, which is one of the main reasons for going to the Caribbean.

Knowing this ahead of time, my wife, master of discovering new things, had arraigned for us to travel to a little spot away from the main drag. A wonderful joint called the Krazy Lobster. But first we had to get out of this maze. My wife had actually watched a video about a person navigating this area, but the officials must’ve added onto it since then, as she became confused after a certain spot. 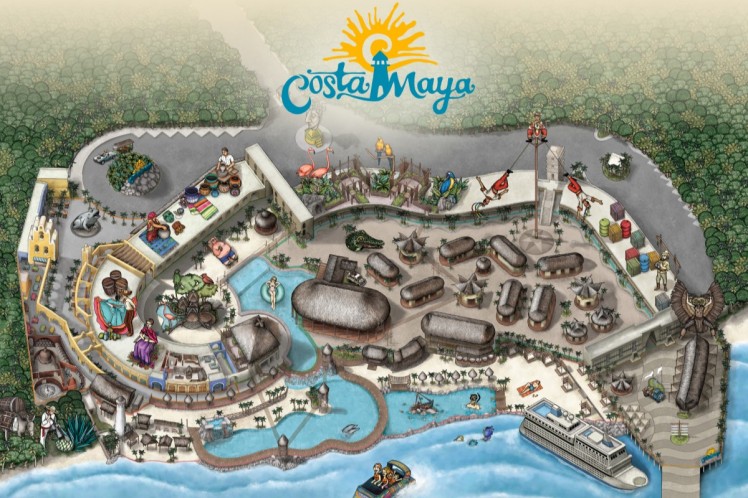 As she tried to figure out the correct path to the cab lot, the heat began getting to me. Normally there’s a nice ocean breeze to offset the high temperature, but the ring of stalls blocked this. A powerful thirst descended on me, but my natural frugalness (called “cheapness” by some) stopped me. I had a full drinks package on ship. Why would I pay for some overpriced Mexican Pepsi, when I could get it for free not very far away?

My wife was starting to become very upset, this forced us to cut behind some stalls and walk through some forbidden paths until we emerged on the outside of the boardwalk. Here is where the reality of this fishing village began to take shape. The tourist boardwalk was nice and happily framed, everything was freshly painted and presented with a positive image. The actual village was much more depressed (not as much as what we saw in Honduras and Belize, as you will read), but the contrast caused me to start. Let’s say it’s the difference between being in Disney World and a regular American neighborhood.

We took a short cab ride to The Krazy Lobster. I had thought it was just a little restaurant by the beach, but it turned out to be much more. The whole of the beach was roped off, with tables and parasols provided right up to the shoreline. Wi-fi was offered, a rarity. The cruise line demanded we give them $10 day to use there’s. I used it as an excuse to turn my cell phone off for the week, which was a rare treat for me.

Buckets of Mexican beer (there are other brands beyond Corona) were brought out. I justified the purchase by saying these were brands not available on the ship. Then we dug into what I was really waiting for: The Lobster. As you can tell from the photo this is not a Maine Lobster, but one indigenous to the Caribbean. The main difference being a lack of front claws. These were cooked in a savory cheese sauce, with chunks of papaya and mango. We ate four between us. Rarely have I ever been so fat and happy. Fat, yes. Happy, no. We’d eat a lobster, have a beer, run the five steps into the ocean, flounder around for an hour, get out, and repeat the process. Loads of fun.

The original plan was to go elsewhere and soak in more culture, but it was so nice that we ended staying the whole day. During that time I saw a lot of other tourists come and go and I noticed one bizarre fact. None of them ordered the lobster. It was all, “Can I get a plate of nachos?” or “I’ll have the hamburger and fries”. Who the hell goes to Mexico to order a hamburger? Granted, their main dish was pricey, but don’t you want to try something different when in a foreign country? Not sit around and compare this fast food to that in the USA.

The only other annoyance was that the place was deluged with people hawking their wares. While this was a step up from the normal beggars I was used to, it was still a never ending stream. Every five minutes someone came by to ask us if we were interested in their crappy merchandise. After we said no they moved on without a hassle, but having to say no over and over was a bit of a grind. I did relent and pick up a few Cuban cigars and a leather wallet. The guy claimed it was handmade by his family, who had personally shot and skinned the cow it came from, but I was skeptical. It sure looked like a lot of the wallets I saw in the tourist trap. Little tip, it’s expected to haggle with these beach vendors. Never pay the first asking price.

After such a relaxing day, we wandered back to the ship to soak in more on-board atmosphere and speculate on our next stop: Belize. More on that in the next post.