Truly a horrible piece of cinematic film. The purpose of it is in the title. Splatter gore about the place as a cheap thrill. This was part of the cheap-o drive-in circuit, the old time equivalent of direct-to-video market. Make something cheap, toss it out, there’ll be some return on the investment.

The plot is as follows: A TV talk-show hostess and her boyfriend investigate a shady magician whom has the ability to hypnotize and control the thoughts of people in order to stage gory on-stage illusions using his powers of mind bending. So while the audience thinks the subject are unharmed, he is really tearing them apart. But somehow this mesmerism, allows the dead person to go back home, then fall to pieces. Later we see Montag collecting the bodies – for no real reason. The motivations for this character are not mentioned, so there’s no real reason for any of this to happen. All of this wraps around into a twist ending that makes no sense, but then you don’t watch a cheapo splatter film to study the nuances of high drama.

One of the high points of the film, next to the gore, is the laughably bad acting. Everyone seems to be cite reading their scripts off of cue cards. What doesn’t help is that half the film sounds like it was miked in a bucket of lard. So everyone’s voice is either too low and garbled, or ridiculously too loud.

The most egregious violator of this is Ray Sager who plays Montag the Magnificent.  You have to hear it to believe how bad his acting is. Every word is loud and said without inflection. You will probably burst into laughter with every line he speaks. Strangely, he went on to have a successful career in television as a producer. 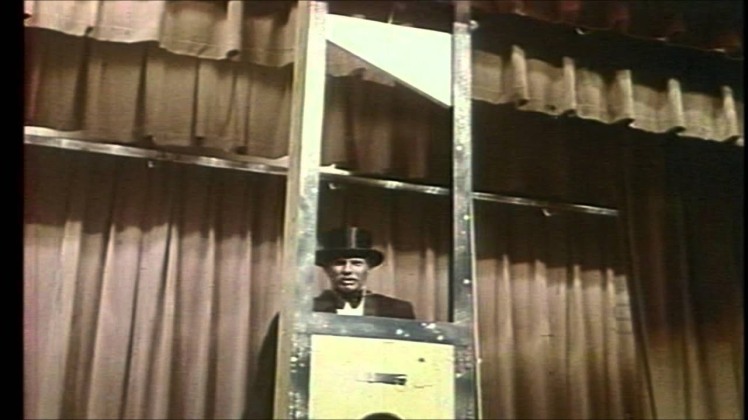 Of course this was produced by the Godfather of Gore, Hershell Gordon Lewis who specialized in cheapo horror flicks like Color Me Blood Red, Two Thousand Maniacs, and Blood Feast; as well as nudie cuties such as Daughter of the Sun and The Adventure of Lucky Pierre.

The entire film is below. Enjoy and Caveat Emptor.