The use of prophylactics, like abortion, is an age-old tradition dating back to the root of civilization itself. The Roman, the Greek, the Ancient Egyptians used linen ones or ones made from dried animal intestines. However, it wasn’t until Mr. Goodyear and his technique for synthesizing natural rubber, that the current condom was born. Then in 1919, the single-use latex condoms were invented by  Frederick Killian from Ohio.

Latex was the ideal material for condom production as it was thinner than rubber, didn’t aged as quickly and was relatively odorless. Using latex also meant that condoms were cheap and fast to produce, leading to mass production.

However, it wasn’t until the 1920s, with a lift on the ban in advertising for condoms, that things began to take shape. During WWI only, the German army distributed condoms to its troops. Thus, it was estimated that at least 5% of British and American military forces came back home infected with either syphilis or gonorrhea. A public health scare ensued and so the ban was lifted to help alleviate people’s fears. This is reflected in many of the images below, which proclaim on their front cover “sold for the prevention of disease” or “for medical purposes”. Meaning, you’re not supposed to enjoy having sex while using them, I guess.

During my current research, I came across a number of old pictures of condom tins. Yes, they were distributed in little tins boxes which could contain between three and twenty, depending on the pack size. They are below. Enjoy and Caveat Emptor. 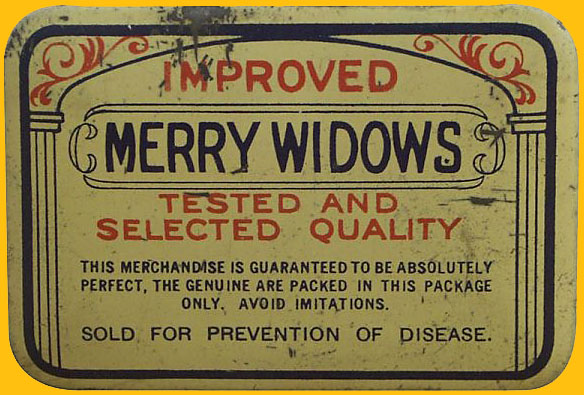